Grill to Perfection with Smokers and Sear Zones 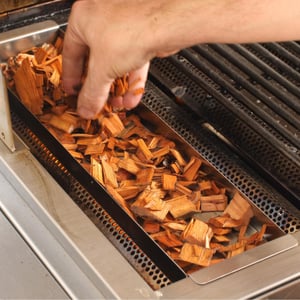 It's difficult to underestimate the tastiness and aesthetics of a perfectly seared piece of meat. When your steak gets that wonderful browning, followed by a well-timed smoking, the aroma makes your mouth water. Such perfection is obtained with a high quality grill and a little understanding of the cooking process. Proper grills will have smokers zones, sear zones, and the flexibility to quickly shift from searing to smoking.

There's not much more important to proper searing than precise temperature control. Having heat zone separators means cooks can quickly shift meat from searing to smoking. Combine this ability, with a grill that has a wide burner temp zone range, and you can sear with the required precise temperature control. Having said this, infrared burners are often called searing burners for a reason. They allow for extremely high heat while minimizing flare ups and reducing cooking times. High quality grills may be flexible, giving you the option to exchange a conventional burner with an infrared burner as needed.

Smoker boxes are often the first thing that comes to mind when thinking of smoke zones. Placing meat closer to the box will bring more of that smokey flavor. A good smoker box is solid enough to hold any cooking liquid in cases where maintaining moisture is important. This is especially vital after a searing, which may dry your meat to an extent.

Versatile grills, designed with good smoking in mind, will also have heat zone separators, a wide-ranging burner temp zone, and full coverage flame tamers. Heat zone separators serve as separate smoke zones and are especially handy when cooking a lot of meat at once. Flame tamers create more smoke by maximizing the vaporization of grill drippings. Of course, having a very low flame allows for longer cook time and more smoke exposure. This all makes for more of that sought after natural smokey flavor.

The Benefits Are Real

The exquisiteness of a well-seared steak is not just a fad. The searing-created browning sets off a phenomenon called the Maillard Reaction. Basically, this is a process where molecules regroup into rings and is set off by complex interactions between amino acids and sugars. This, combined with that proper smoking, creates the undeniable smell and taste of expertly grilled meat.

Service Beyond The Showroom

As an award-winning, family-owned, small business, our reputation is built upon integrity, professionalism, and a continued commitment to provide great service to our customers.  For over 55 years, we have provided materials, ideas, and advice to improve the look and feel of your home.  We love what we do!  And we love helping homeowners bring their dreams to life even more.